It's a matter of historical record.

We know because we were there, at the count in Macclesfield Leisure centre. These are the figures produced by the returning officer on the night - column A is Tatton and column B is Macclesfield. 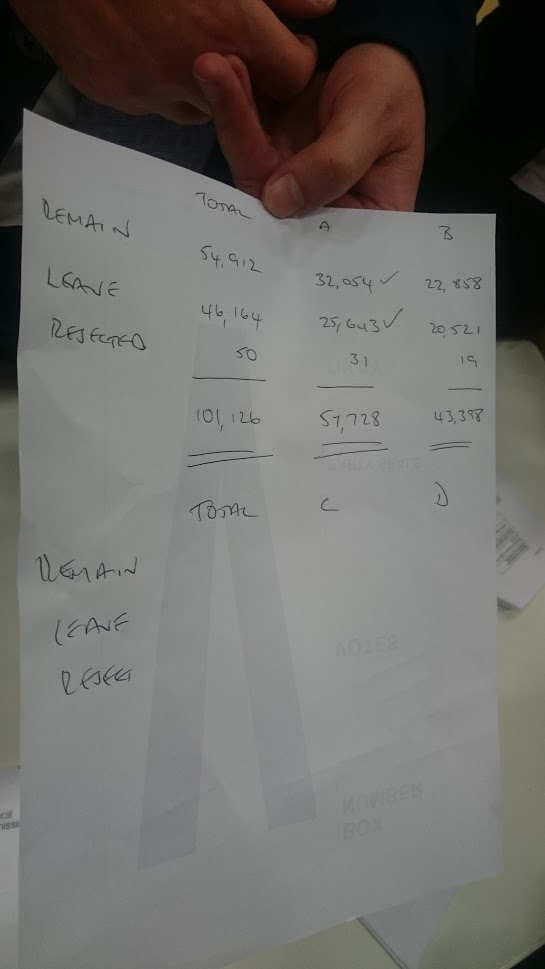 This is not surprising. Demographically Tatton voters are young and well educated, and belong to the groups that wanted to stay in the EU.   The same is true, incidentally, for Macclesfield.The wikipedia entry for Tatton has this figure.

But Cheshire East also includes the constituencies of Crewe & Congleton   (that's columns C and D on the paper) for which the counting finished later.  They (again, in accordance with the demographics), voted leave, enough to tip the balance for the county to something like the national figure - 51.2% to be precise.

However the individual figures were not published, only the total one. That led to some misleading statements by sloppy journalists, even the BBC, who were writing pieces about George Osborne (remember him?) and couldn't be bothered with the difference between Tatton and Cheshire East. They  used the overall Cheshire East number to say that "this is what his constituents voted for" - ignoring the differences between constituencies and lumping in the Crewe and Congleton electorates with that of Tatton.

Actually both these numbers ignore the fact that a bit  of Tatton lies not in Cheshire East but Cheshire West - places like Barnton and Comberbach.  We don't have any separate figures for them. The best way of getting at the total picture is the analysis done by  Chris Hanretty, an academic for the university of East Anglia.  He analysed the whole country, not just Tatton, using well established demographic data for constituencies and the referendum results by local authority, and he puts Tatton on 53.4% remain, 46.6% leave.

So Tatton voted to Remain.  Of course it was close. Of course that was three years ago. Of course voters may have changed their minds since then.  But what Esther McVey calls 'the will of the people' was not the view of her constituents.  Her constituents should remember that on December 12th.