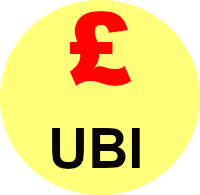 The Liberal Democrats have adopted Universal Basic Income - UBI - as a policy.

What's it all about?

It's a simple idea - and at first it sounds outrageous.  But when you think about it for a little you realise that it's not ridiculous at all, and in fact it makes very good sense.

Basically it is what it says. Everyone would be provided with a basic income.  Not a lot, but enough to live on. So no-one would have to go hungry, or cold, or be homeless.

Crazy utopian idealism? I'm sure the Daily Telegraph would say so. So before going on about the advantages, let's look at the two big arguments against it.

First, it would cost a lot, and that would have to be paid for by the taxpayer. It would. But the taxpayer already supports those in need - pensioners, the unemployed, the low paid. UBI takes care of all that. UBI also goes to those in work, and that pretty much compensates for the extra tax they'd be paying. So overall, despite the headline figure in the hundreds of billions, it's pretty much neutral.

Secondly, it sounds like it would encourage idleness.  Wouldn't folk just sit at home and watch TV all day if they didn't have to go out and get a job?  But actually, if one can get away from the stereotypes, there are very few people like that. Sitting at home all day soon palls (ask any pensioner). People work for job satisfaction, to do something they enjoy, and for social reasons,  not just for the money. Trials of UBI have shown that most recipients continue working.

Now the benefits: it would mean that everyone who needed support would get it - no more falling through the cracks of systems like universal credit with its labyrinthine rules. It would provide support for the unsung army of carers, security for musicians and writers and those in the gig economy vulnerable to changes.

The fact is that 100 years of automation means that the work necessary to support the population is much less than it was. We no longer need thousands of peasants tilling fields to produce our food, just a few farmers on supertractors.  We no longer needs hundreds of coal miners down the pit, just a small team to maintain the wind farm. The Covid crisis has shown up the craziness of millions commuting to work to support sandwich shops, earning money which we then splash in the pub or on holidays to support the travel and hospitality industries. UBI would enable people to work because they wanted to (and they do), not because they had to. To take jobs they would find fulfilling and enjoyable, not as wage slaves who needed the money.

Hopefully there will be lots more about this topic in the future. It's a great idea whose time has come.